It’s been a while since I wrote a proper post so hello and thanks for sticking with me. I have many excuses, two of which I’ll be expanding on in this post 🙂

I need travel, and travel needs me…at least that’s what I tell myself, and so in the months of May, June and rounding up in July, I went to the continent (Hi Raven Simone) of Africa for the first time. ‘What?!’ I hear you say. Yeah…don’t @ me, I don’t want to explain.

The first place I went to was Nigeria.

Like I said, this was my first time going, and as soon as I landed in Mohammed Murtala International Airport, I thought ‘I really fit in here’ hahaha. I went for a family wedding, and people kept asking me ‘How does it feel? Is it a culture shock?’ and my response was ‘No’. Listen, when you grow up as a Nigerian, though nothing compares to actually being in Nigeria, everything else is the same; the language, the haggling, the culture…etc. Literally it’s just a shift in location.

I really enjoyed my time there doing activities such as going to Elegusi Beach, experiencing the press, hassle of a sprawling Crystal Maze-ish Balogun market (Deptford/East Street Market are like children’s markets compared to markets over there), negotiating for bags and bags of Expressions in the market (if anyone wants blue or purple, holla), attending African Fashion Week, hanging out with cousins and extended cousins, fighting with cousins and extended cousins, meeting my mini-me (she’s in the vlog can you spot her? ^_^), nationwide NEPA & fuel lack meaning extremely little air con and electric for about 8 days (black market fuel price increased over 10x the normal price O_O), renewing my passport (the BANTER & joke of that experience), the ‘tailors’ who messed up nearly every dress they sewed, getting my hair done for peanuts, getting fleeced by some area boys after we went to some club (if any of my cousins are reading this #StillLaughing #12Kto20K #WhoDrankTheJackDaniels #WhatDeleNeverSaid)…I can’t even write anymore, I’m screaming.

Anyway, I decided to do a little video for the family out of the small videos I took. Based on their feedback, I think it’s alright enough to share, lolz (don’t judge me I wasn’t recording with the intent to vlog). Camera-wise, I usually take my DSLR everywhere and I’m hungry for a good shot, however in Nigeria it just didn’t seem legit to do that out in the street. It was more of a phone kind of vibe, so that’s what I took the few photos I took on. I was having so much fun I just didn’t shoot that much at all. Anyway, I also filmed the clips on my iPhone 6…wish I had taken more now, but there’s always next time. If you want to see what photos I did take, hop over to www.iseeicatch.com. Hope you enjoy the vlog (*disclaimer* most of the footage is taken in cars as that seemed to be the only time I remembered to record, lool)

From West to North. I visited Marrakech with a friend for a short break and it was just so live. For the amount of things that happened – the drama, the beauty, the exploration, the awesome riad, making new friends, learning a bit of Arabic, resurrecting GCSE French to get us out of all manner of potential misunderstandings, chilling in the Medina drinking Moroccan tea, the crazy Souks, the apothecary experience, learning the many uses of Argan oil (you can eat it and it’s so nice!), the racially ignorant street hawkers, the queen of haggle that I became, the food (the great and the TERRIBLE), visiting during Ramadan, the outstanding mountains, riding camels, having lunch in the middle of a river, the debacle of Ryanair and so much more…it felt like two weeks. Honestly it was such an experience. Would definitely recommend it, and I’d definitely go back. I guess the one thing we didn’t do, that was highly recommended to us, was visit the Sahara. But we met a Berber guy from there in the Medina, and spent hours talking and drinking tea with him, so it’s almost like we went there ;).

Again, way too much happened for words, but hopefully the photos (click on them to enlarge them) will represent a little. I also took quite a lot of footage out there and will update this space with a video when I finally get round to it! 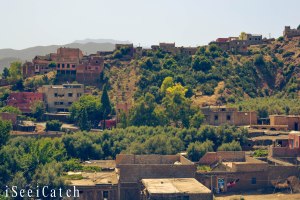 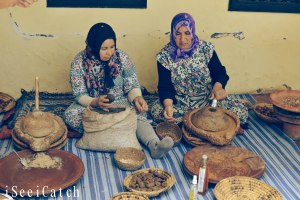